The making of "William Shakespeare's 7 ages of man"

For my first real animation project, I looked for some existing, well-known, public domain/out-of-copyright narrative with a strong visual interpretation that I could adapt. This would let me concentrate on the animation techniques, and allow viewers to judge the results against relatively familiar criteria. It would have a duration of between 1 and 2 minutes, and be suitable for animating in modelling clay (plasticine).

I chose a reading from William Shakespeare's play As You Like It, Act II Scene VII, Jaques: "All the world's a stage...", and started the process that would eventually result in:

I read a couple of books, including Cracking Animation: The Aardman Book of 3-D Animation, and watched some of the Morph videos. I listened to a couple of readings of the speech on YouTube.

I sketched nine storyboard panels, which were referred to, and annotated, throughout the production.

I worked mostly from the text, rather than try to emulate any real Shakespearean actors. I recorded a full speech three or four times before I got a sound that seemed acceptable, concise and clear. I used my Yeti microphone with pop shield and Apple Garageband, which has presets for narrative-style audio (like a podcast, I guess).

Mainly plasticine was used, from My Own Morph, and some additional pots. Also, Original Sculpey clay, aluminium wire and mesh, plywood, wood, beads and cloth. One tip I followed was to use baby wipes to keep hands clean when handling (and smoothing) the plasticine. A lot of tape and other sticky stuff was used. A textured sheet of dark blue paper was used as a background.

A set of modelling tools for clay was used, along with various woodworking and wirecutting tools.

The main character was based on Morph, and adapted for each life stage. A skateboard from My Own Morph was used. The rest of the props were created specifically.

There were two sets, one a theatre stage with curtains, the other a simple floor. The base for both was a 900 by 600 mm (3 by 2 foot) board, painted white. The texture of these was not as good as a smooth surface for sticking plasticine to, however.

The theatre set was largely made of plywood. The most complex piece, basically an actor in its own right, was the pair of curtains. Not having anything suitable to cut up, I bought the red material from a local store which had a furnishing department. However, when hung, the material was too smooth and flat, so I taped an aluminium wire mesh background to each curtain and shaped it in folds. 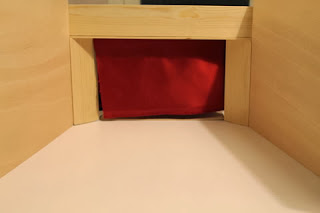 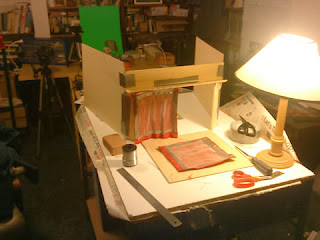 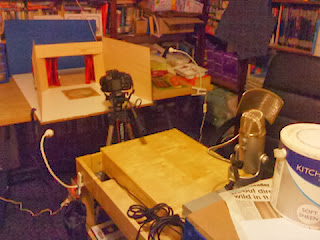 A Canon EOS 1100D digital single lens reflex camera was used, although I should have turned it to full manual, as there were autofocussing and colour temperature issues.

Boinx iStopmotion 2 home edition for Mac was used to pull the digital still images into an animated form. This worked quite well (tip: make sure that no other software is trying to open up when your camera connects, this kind of contention can stop iStopmotion's capture working), although I should maybe have broken down the scenes into separate files, to make rendering and processing quicker.

The animation was timed at 12 frames per second. For some scenes, a steel rule was used to keep movement consistent (millimetres per frame). A movie size of 960 by 540 pixels (large widescreen) was chosen, which should be fine for most current devices. 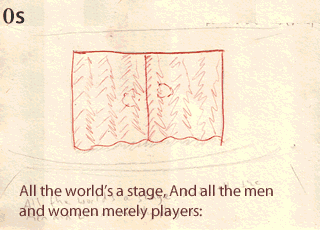 Zoom into curtains, which are moved (the aluminium wire mesh deformed) about as if someone behind was fumbling for an opening. 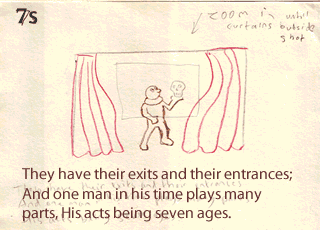 First model instability problem as Morph-like actor wants to nosedive. Try to put at least one (mild) visual gag in each scene, making the skull have some character. 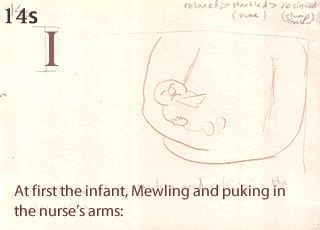 I almost ran out of plasticine for the nurse, whose arms and chest were layered over a wire frame. Clear and white beads were useful for snot, tears and less identifiable bits in the projectile vomit which is created by replacement of different white plasticine shapes. 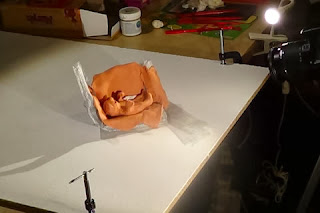 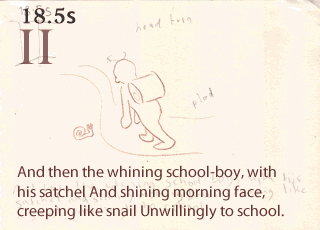 Another instability problem. The schoolboy had a hollow satchel, thin plasticine over wire mesh, and large feet, but still had a tendency to nose-dive. But this time, when the figure fell on his nose, I decided to make a virtue of it by morphing him into a snail, which turned out to be quite easy with repeated small pressings and mouldings, and certainly a strong point of modelling clay. 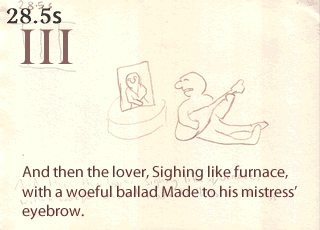 A model of the mistress (morphlike maiden) is photographed, printed and put in plasticine frame. The versatile wooden bench (eight legs, all different lengths) makes its first appearance. 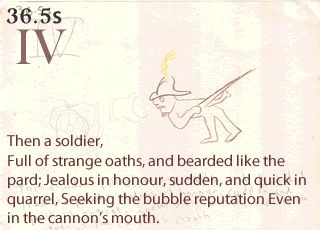 More plasticine is brought in for cannon and hat feather. Subtle things like the cannon's lighting flame may be too subtle. Cotton wool for smoke and wire used for sword and feather spine. 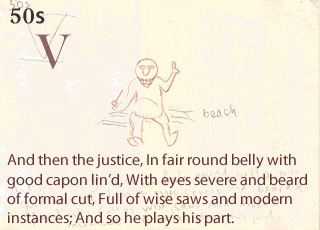 Maybe a seated model will not fall over? Here comes the bench again. Although justice's arms threatened to fall off. The "severe" eyes achieved by slicing off the top of the ovals. I couldn't find a way of working in the capon, which is implied (inside). 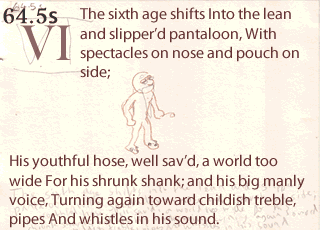 This lengthy scene was a bit of a challenge, with not a lot of action in the text, but I think it turned out alright, and is my favourite scene. The sword becomes a walking stick, the inevitable plunge groundwards (halted by the trusty bench) worked in as sign of infirmity. 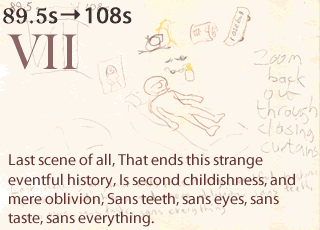 The final scene shows some of the accumulated objects from the character's life as he lies on his deathbed (the pillow is fired Sculpey clay).

Reversing the original zoom, the camera moves out as the curtain closes and the lights are turned off, one by one, leaving us in the darkened theatre where we started.

The animation was exported from iStopMotion, and the audio from Garageband, and combined in iMovie for video editing. Titles and a short animation (Sleeping Dog) ident were added. The synchronization of speech with action worked surprisingly well (for example in Scene VI).

Captions were created by marking up the existing text in Timed Text Markup Language.

The final video was published to YouTube, and the captions file uploaded. A slightly higher quality version is kept for DVD distribution.

Email ThisBlogThis!Share to TwitterShare to FacebookShare to Pinterest
Labels: animation, claymation, making of