Getting set for stop-motion animation

After some encouragement from litter-mates, 2013 was designated "Year of Animation".

A workshop/animation studio was carved out somewhere between the library and the beer cellar of the Beagle's Lair, after bulldozing out the accumulations of years of missed spring-cleaning opportunities.

Some budget-conscious selections from Ikea furnished and equipped the studio with:

For the workshop area, where sets and models would be built, I got a Draper steel workbench from Amazon. Oh, if it were only that simple: the tale of having to pick it up from an industrial estate depot, wheel it to the bus stop, wait for a bus with appropriate access, get it back to the Lair, assemble/disassemble/reassemble it correctly with a rubber mallet; that is a tale of fortitude and triumph and backpain that will not be dwelt upon. However, it is a very nice workbench, with two drawers that I started filling with various tools and glues.

I also got a couple of matching storage containers for all the smaller resources, from nails and screws to thread and wax and beads and so forth that were to play their parts.

After consulting with a photographer friend, I decided to get an entry-level digital single-lens-reflex camera, a Canon EOS 1100D, to be used for the main still photography. I also got a Sony Handycam CX190 for video work and other snaps, which was useful for some research.

For recording audio, particularly narration, I went for a Blue Microphones Yeti USB microphone, and I later got a pop filter (Sleeping Dog's spittle and speech impediments need all the disguising they can get). The audio is recorded in Apple's GarageBand software.

Here is the basic layout plan: 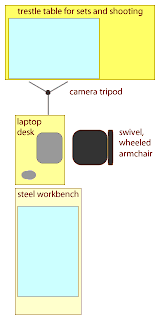